COM2US, well known for bringing you top titles such as Slice It! and Homerun Battle 3D, has just released another top notch game called Third Blade - for FREE! I've spent at least an hour playing this game and let me tell you this - it is extremely addictive! Gameplay mechanics are extremely simple - you use a virtual joystick controller on the left hand side of your screen (all the controls are customisable) and your standard attack keys on the right side of the screen with special skills that have cooldowns before you can trigger them again.
The game features 3 different types of blades - dual wield, one hand blade and a two handed sword which you can use to kill and slay all sorts of monsters in the game. After each level you get to purchase items with coins to improve your weapon, armor and also purchase health potions. You also get to use runes (later on) to purchase special skills that I mentioned earlier which can be triggered at any time but has a cooldown affect to it. Full review after the jump. 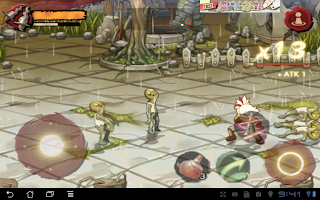 As you can see from the screenshot above, the graphic's are in japanese anime style and it reminds me of the popular Naruto series. At the top left hand corner, you get to switch weapons between the dual-wielding blade, a single handed blade and a gigantic two handed sword. At the top center of the screen you have the minimap wihich will display small dots indicating the enemy and a white dot indicating your position.
After you have defeated several monsters, a portal to the next section of the stage will appear where you can continue to kill all the remaining enemies (until there are none left) or you can just proceed to the next section if you wish. After a few sections, you will enter the last section where there will be a boss fight which is essentially a larger version of some of the monsters that you've seen and some bosses have special abilities too like poison aura's and such, so they're not just supersized for nothing. 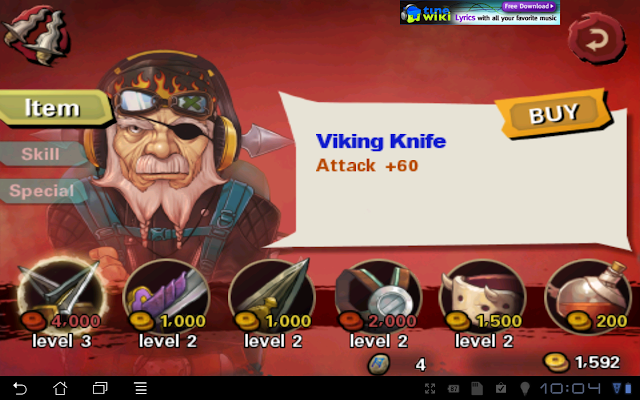 After defeating the boss you will get to go to the shop to purchase stuff just like the screenshot above. Coins can be "earned" by defeating enemies and picking them up. And you must pick them up fast too before it disappears quickly. There's another currency called runes where you can use to upgrade your skills and you can purchase runes for a price which I will mention in a while.

After you have played the game for a while (like myself) you would wonder - how can such a great game be free? Well, firstly it has ads appearing in-game at the top and during the load screen. Ok, no big deal. But then after you play 1-2 stages, you will notice this: 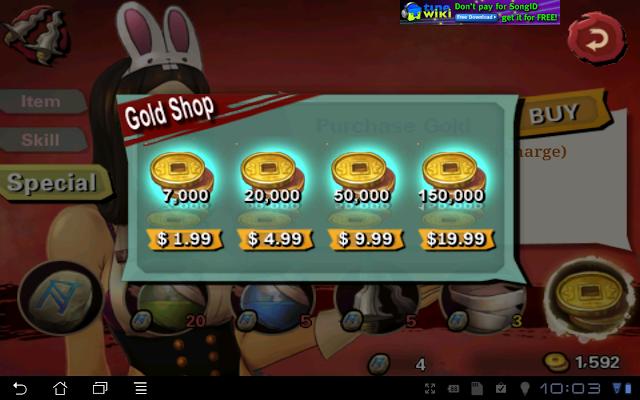 You will get access to a "special" section after completing a few stages which allows you to...purchase coins using real money. Yeap. That basically means in-app purchases. It all makes sense why the game is FREE in the first place. This is a common and relatively new way of earning money instead of selling the game, they give it out for FREE but make it addictive enough that you want to buy some stuff to improve your chances of winning or make your gameplay a whole lot better / easier.

Just look at the highest amount - $19.99. That's expensive if you ask me! Although it does give you a lot of in-game currency but still, you could easily buy a few decent games in the Android Market with that amount of money you would be spending on in-game purchases right?

As I mentioned earlier, another in-game currency is called runes and you'll probably guess it by now - you can purchase it using real-world money, denero or you can use the in-game cash of 700 coins to buy 1 measly rune. You might be wondering, yeah sure i'll just get lots of coins to buy more runes then! Well you could do that, but its quite difficult because you would have to be balancing your money with upgrading your weapons, buying potions and whatnot. Not only that, 700 for 1 rune is a lot because you need a lot of runes to upgrade your skills. Luckily runes are cheap though if you plan to buy them with real-world currency, as you can see below: 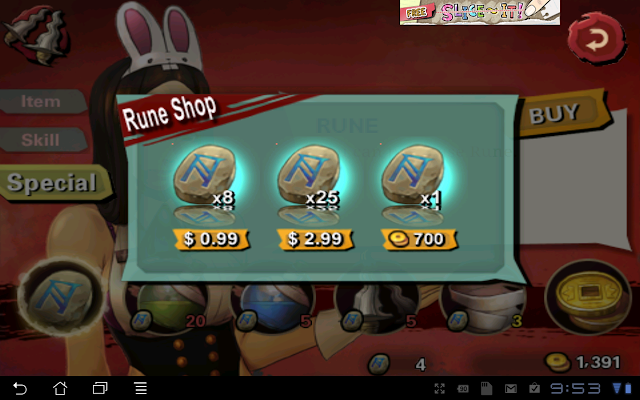 The game carries a similar style and flow when you move from one part of the map to another as you play, with different sets of creatures and bosses to fight each time. While the gameplay still remains the same, I would still highly recommend you to try this game out as it is extremely action-packed and it is probably the most action packed game I've ever played for Android.

The game is very fun to play on a tablet like the ASUS EEE Pad Transformer that I've tested this game on. I could not try the game out on my Nexus One as I lacked the space - the game requires at least 50MB of internal storage and I only have left 30 which required me to uninstall a lot of apps to get to that big 50. So I ended up installing it on my EEE Pad Transformer and it worked flawlessly. Do take note that if you're playing it on your transformer, do NOT dock your tablet with the keyboard dock as this causes the game to crash for some reason. Other than that, the game works flawlessly with no issues whatsoever. 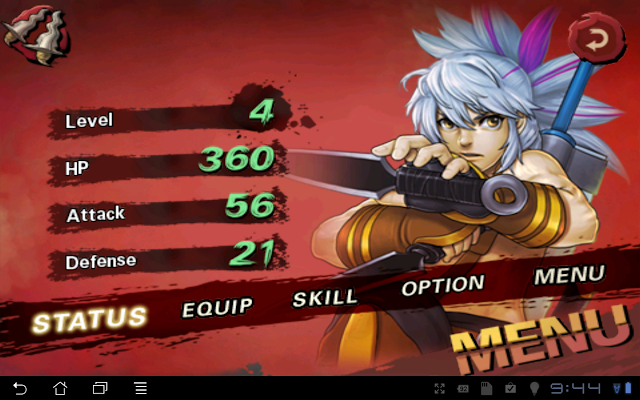 Despite the game being somewhat "crippled" unless you pay some real-world money to buy runes or coins, its still a very solid game and I believe it is still playable without making any in-game purchases whatsoever. But of course, if you have the dough to spare and really enjoy playing this game, go ahead and make your purchase. But for me, I don't believe in in-app / in-game purchases, at least I haven't found a game that I really would pay money for an in-app purchase yet.

Head on over to the link below to check out this game, you absolutely owe yourself to at least give it a try: