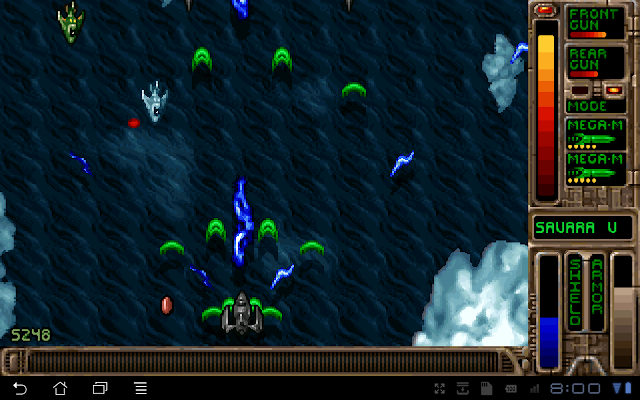 For those of you who came from the good old DOS era like myself, you'll probably have heard of Tyrian - probably noted as the BEST vertical shoot 'em up game of the genre and it still is even now. Fast forward a couple of years, Pelyo - the genius behind the OpenTyrian port for Android - you can see from the screenshot above - it still looks just as awesome as you first played it many years ago.

In fact, I believe OpenTyrian is the BEST vertical shoot 'em up game for Android right now period. Even the likes of Sky Force or Sky Force reloaded from Infinite Dreams can't best this golden oldie. For those who have not played Tyrian you might be wondering - what's so great about this game? Firstly you get to play two major distinct modes - a Full Game mode and an Arcade mode.

In Full Game mode you get to customise and upgrade your ship to your fancy with different front guns, rear guns, shields, generators and side arms too. In Arcade mode on the other hand you pick up powerups that appear on screen to determine the type of weapons that gets equipped on your ship and picking up bubbles (if I recall correctly) to upgrade your weapons.

Besides these main features you obviously get to blast all sorts of different kinds of enemies and there's also bonus and secret levels to get to - you will definitely have plenty of fun! As you can see from the screenshot above, I managed to get OpenTyrian installed and working perfectly on my ASUS EEE Pad Transformer. What's not shown in the screenshot is that if you don't have a keyboard like my Transformer's keyboard dock, you'll get on-screen controls instead - so you can actually play this game on your phone if you fancy.

There are other configurable options too - you can use your accelerometer to play the game too if you like, again its all configurable once you launch OpenTyrian.

But the best way to play this game is still by using the keyboard and playing it on my EEE Pad Transformer with the keyboard dock is just awesome. You can customise the keys to your fancy or even enable auto-fire in the options menu so you don't have to keep pounding on the spacebar or your fire button to fire your primary weapon(s).

The best part of all - OpenTyrian is completely FREE so this is a game you MUST have in your Android device - so give it a try:

OpenTyrian (FREE) - Android Market
Posted by Malcolm at 9:26 AM